The European Commission must fulfil their obligation to reduce pharmaceutical pollution

Representing hundreds of environmental and health organisations in all 28 European Union Member States and further afield, 14 NGOs are calling for immediate action and answers as to why the Commission have not yet published a strategic approach to address the pharmaceutical pollution of water.

Over 16 months since this missed deadline, HCWH Europe, on behalf of concerned cosignatories, today sent a joint letter to European Commission (EC) President Jean-Claude Junker, Vice-President Frans Timmermans, Commissioner for Environment, Maritime Affairs, and Fisheries Karmenu Vella, and Director General for Environment Daniel Calleja Crespo – expressing concern at the delay of the strategic approach, and calling upon the European Commission to protect human and environmental health. 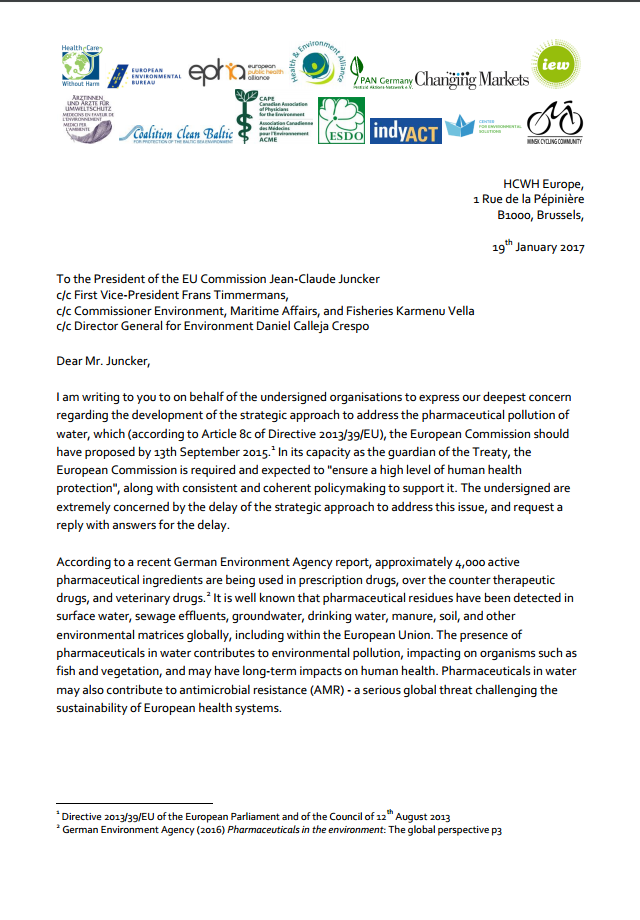 The letter sent by HCWH Europe on behalf of concerned NGOs

It is well known that pharmaceutical residues have been detected in surface water, sewage effluents, groundwater, drinking water, manure, soil, and other environmental matrices globally, including within the European Union.2 The presence of pharmaceuticals in water contributes to environmental pollution, impacting on organisms such as fish and vegetation, and may have long-term impacts on human health.3 Pharmaceuticals in water may also contribute to antimicrobial resistance (AMR) – a serious global threat challenging the sustainability of European health systems.4

The letter sent today on behalf of civil society is the basis of a new petition as part of the Safer Pharma campaign (www.saferpharma.org), organised by HCWH Europe, to address the delay of the strategic approach which is putting the health of EU citizens and the European environment at risk.

“All experts (including the UN), agree that we are facing a global pharmaceutical pollution problem and we need to minimise the release of medicine into the environment throughout their life cycle: production, use, and disposal. It is unacceptable that the Commission is delaying any action to protect human health and the environment and allowing pollution to continue. It is unacceptable that the Commission delays the process laid down by EU law and we expect the Commission to publish the roadmap swiftly, so we can begin to address the problem of pharmaceutical pollution”.

“Our drinking water may include an unwanted drug cocktail – a study in the Danube River Basin, spanning 14 EU countries, identified 7,767 chemical compounds, many of which were pharmaceuticals or their transformation products.5 With the European Commission delaying to address this problematic issue, can we really expect a healthy future for us and our children?”

“Tonnes of antibiotics and other pharmaceuticals like antiparasitica and hormones are used in food producing animals. Those pharmaceuticals contribute to water contamination all over Europe day by day.6 The European Commission must finally come up with their strategic approach, one that will secure an effective reduction of pharmaceutical discharge from animal livestock holdings. Such an approach must tackle the problem at its source, by supporting better husbandry that fosters animal health and well-being and subsequently reduce the need for large-scale pharmaceutical use”.

“It is crucial that the European Commission takes a holistic and coherent approach to pharmaceuticals in the environment, which recognises the important links between water pollution and the proliferation of “superbugs”. A strategy on pharmaceuticals in the environment is urgently required, and it must be clearly linked to the follow-up Action Plan on AMR given that resistant bacteria pose a major cross-border threat to health.”

3 Pharmaceuticals in drinking water, WHO, 2012: www.who.int/water_sanitation_health/publications/2012/pharmaceuticals/en/

HCWH Europe is a non-profit European coalition of hospitals, healthcare systems, healthcare professionals, local authorities, research/academic institutions and environmental and health organisations. It currently has 75 members in 26 countries from the WHO European region, including 17 EU member states. HCWH Europe works to transform the healthcare sector worldwide so that it becomes more ecologically sustainable and a leading advocate for environmental health and justice across the globe. We bring the voice of healthcare professionals to the European policy debate about key issues such as chemicals, climate change and health, green building, sustainable procurement, pharmaceuticals, sustainable food and waste management.

About the Safer Pharma campaign

The Safer Pharma campaign aims to: